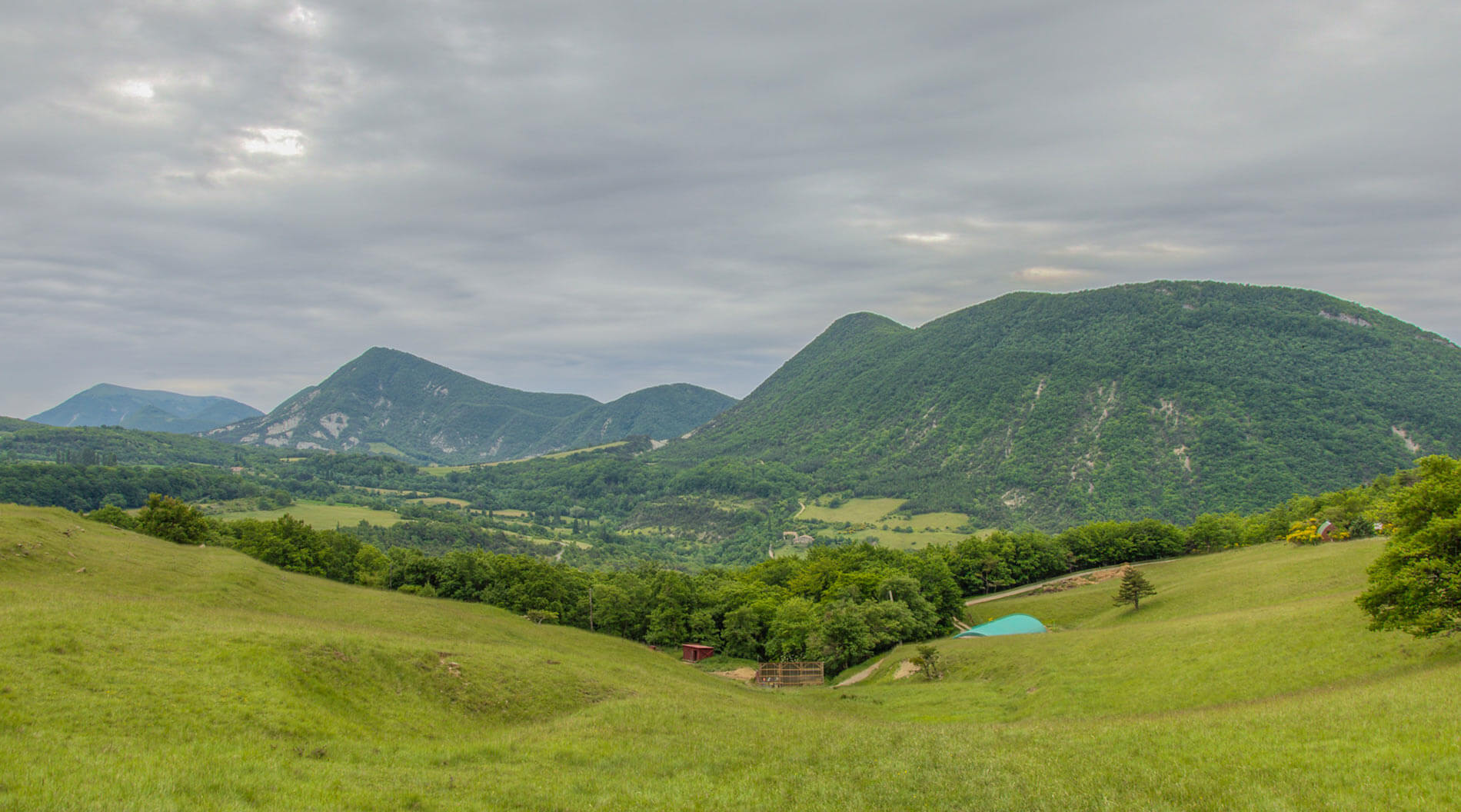 Top 10 Hikes in the Drôme Region

Located in the Auvergne-Rhône-Alpes region along the Rhône valley, the Drôme is an area where nature reigns supreme — which explains its popularity with hikers from around the world. The Regional Natural Park of Baronnies Provençales to the south and the Vercors Natural Park to the east are particularly attractive. In fact, your trek through the Drôme will take you across forests, creeks, and gorges, allowing you to enjoy stunning panoramas of the surrounding mountains. With such beauty everywhere, it’s hard to know what to tackle first. Put these 10 must-see hikes on your Drôme “bucket list,” however, you’ll embark on a series of adventurous trails that take you to most of the most beautiful sites and conveniently loop back to our campsite in the Drôme.

The tour of the Grand Veymont is one of the most beautiful hikes in the region. This difficult hike of just over 20 kilometers begins right at the car park of La Maison Forestière de la Coche, south of Saint-Agnan-en-Vercors. Your journey on this trail takes you to the rugged plateaux of the Vercors Massif plateau and breathtaking views of Mont Aiguille.

“Les Trois Becs,” translated to “The Three Beaks,” form the highest point of the Saou forest. Starting at Col de la Chaudière, in the village of the same name, pass through each of the three “Becs” (Le Veyou, le Signal, and la Pelle) on your hike of just under 9 kilometers.

The good news is that this hike is accessible to both beginners and experts. Expect magnificent views of the Trois Becs, the Saou forest, the Ambel plateau, and the Ardèche mountains. About 12 kilometers long, it starts from the La Blache district north of Plan-de-Baix.

In the Gorges and Passes of the Baronnies

This well-signposted hike of almost 16 kilometers starts from Buis-les-Baronnies. Along the way, take time to appreciate the majestic landscapes of the Regional Natural Park of Baronnies Provençales and Mont Ventoux. To the south of Buis-les-Baronnies is yet another easy circuit around the Saint-Julien Rock.

This large cliff above Rémuzat is the den of vultures. A superb 10-kilometer hike from the village, this trek allows you to explore the rockface in its entirety. You’ll scale quite a few levels and vertical passages carved right into the wall. This is an adventure of epic proportions!

The Troglodyte Village of Barry

The first traces of this village near Pierrelatte date back to prehistoric times. Explore the region on an easy hike of just over 4 kilometers from Saint-Paul-Trois-Châteaux, where you can also find Les Caves Cathédrales du Mas Théo.

A challenging hike of almost 20 kilometers offers you stunning vistas of the Ambel Plateau, which dominates the Drôme region. Enjoy scenic views of the Hauts Plateaux du Vercors to the east, the Grand Veymont to the west, the Tête de la Dame, sitting at an altitude of 1,506 meters, and the Omblèze valley. Starts from the Col de la Bataille near Omblèze and follow the GR93.

Located in the Glandasse Massif range, this is a somewhat difficult hike of almost 12 kilometers. Pass through an impressive tunnel carved into the rock on the mountainside to earn incredible 360° views of the region at an altitude of almost 1,500 meters. Depart from the hamlet of Gallands in Menglon.

The canyon’s strange name hides a natural formation with a fairytale-like atmosphere. The easy 8 kilometers hike starts from the D578, between Omblèze and Plan-de-Baix, at a place called “Baume Noire.” Not far from there do not miss one of the most beautiful sights in the region, the 72-meter high Druise Waterfall!

On the Crests of Grand Barry-Gaudichart

Departing from Vercheny-le-Temple, this 17-kilometer long (but easy!) hike offers spectacular panoramas of the Baronnies and the Vercors, before passing through the ruins of Barry Castle.

Hiking essentials are a must. Bring along water, good walking shoes, a compass, and IGN maps. Use the Visorando GPS application for added guidance.