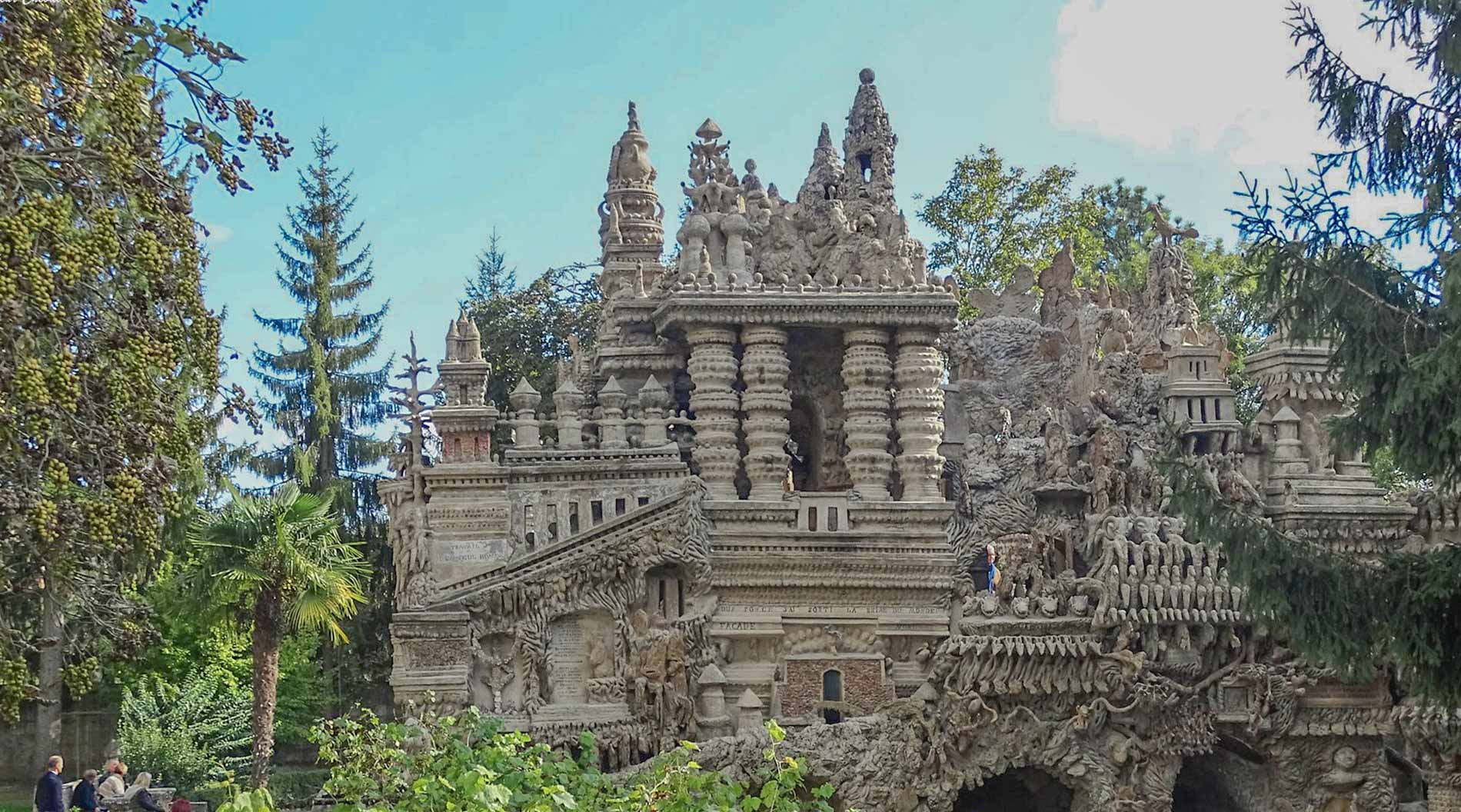 The Ideal Palace of Postman Cheval

The Postman Cheval’s Palace, a spooky building that resulted from of one man’s dream, is truly unique. Ranked as the second favorite building of the French, it is a sight to behold. Make the most of your visit to the Drôme and go see this gem of naive architecture.

Who was Cheval The Postman?

Ferdinand Cheval was the postman of Hauterives ; in 1879, aged 43, he began the construction of his palace. Traveling around thirty kilometers into the countryside every day, he used his faithful wheelbarrow to collect stones.
Alone and misunderstood, he inscribed on his monument “the work of one man”, completing his dream palace in 1912.

The work of Ferdinand Cheval

The original inspiration for the Palace came from Cheval’s daily travels.  Whenever he discovered a peculiar-looking stone he would pick it up, preserving for his future construction.
It took him thirty years to design and build his Palais Idéal, as Cheval called the building. The Palace is 12 meters high and 26 meters long, its design is inspired by world’s mythologies, featuring Egyptian, Indian, Greek and Biblical motifs.
Part of the naive art movement, the Ideal Palace grew organically, nurtured by the thoughts and inspirations of its creator, who was influenced in particular by the postcards from all over the world that he distributed on his duty.
The Ideal Palace was classified as a historical monument in 1969. After the death of Ferdinand Cheval, the building was bequeathed to the municipality of Hauterivesand is now open to visitors.

The Ideal Palace is, above all, a work of art, as evidenced by its compact size, and the abundance of details and ingenuity of the motifs gracing its facade that make it a unique attraction.
The facade on the east side represents the centerpiece of the building : columns and moldings form the Temple of Nature, which has two water fountains (the basin of the Source of life and the waterfall of the Source of Wisdom ). Further on, an Egyptian-like part, comprised of numerous bulging columns, catches the eye, the contrasting Hindu temple is placed nearby.
Other architectural elements complete the facade of the Ideal Palace : a Swiss chalet, a square house of Algiers, a minutely reproduced medieval castle. The Palace is a quirky ensemble of architectural styles from various eras and countries, unified by the construction method of Ferdinand Cheval, who mainly used mortar and cement.

Discover also the highland villages and the lavender of the Drôme