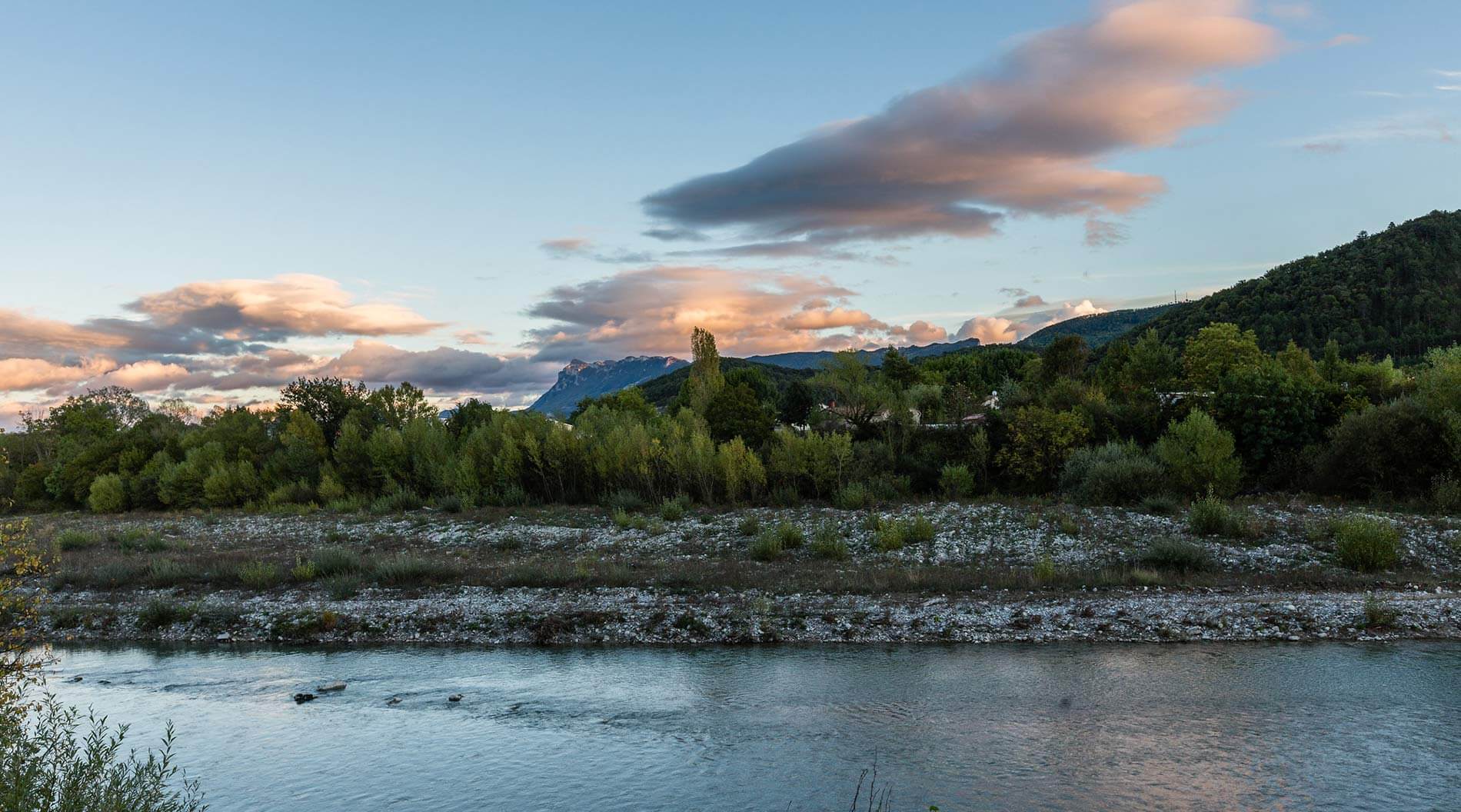 The Most Beautiful Villages of France in the Drome

Located in Auvergne-Rhône-Alpes in the south-east of France, Drôme is known for its unique landscapes such as those of the Baronnies Provencal regional natural park, its historic castles but also for its charming stone villages. Five of them have the prestigious “Les Plus Beaux Villages de France” label and are a must-see during your camping holiday in Drôme.

Celebrating the Written Word in Grignan

Located  37.5 kilometers away from our campsite, Grignan was the last to join the prestigious club of the “Most Beautiful Villages of France,” but that’s certainly not because of a lack of splendor. In fact, as you visit, you’ll be awestruck by its most imposing resident, the largest Renaissance castle in south-eastern France. Grand though it is, the site was put on the map by the correspondences and witty letters of the celebrated Madame de Sévigné, a literary icon of the 17th century, who stayed within the castle walls and wrote to her daughter about everyday life.

And though history is well and alive, Grignan today is a true testament to the art of living. There are plenty of guest venues, charming hotels, gourmet restaurants (such as the Michelin-starred restaurant, Clair de la Plume), good wines (AOC Grignan-lesAdhémar), Colophon, a library, bookshop, and museum dedicated to exploring typography through beautiful letters and writing.

Walk in the footsteps of the Marquise de Sévigné as you stroll along the small alleys, abundant with the smell of old roses. Climb up to the castle, through the old stone doors, and discover the treasures that lie in wait. Cool off at the edge of the wash house and drink in the scent of heady lavender all around.

You’ll also enjoy the rich cultural program, which brings the village to life during the summer. Particularly notable is the famous “Fêtes Nocturnes du Château” and the “Festival de la Correspondance de Grignan,” which celebrates the art of letter writing in all its forms.

Take a Trip Through Time at La Garde-Adhémar

Only 39.1 kilometers separate the campsite from La garde Adhémar. From the top of its limestone spur, you can see that the village of La Garde-Adhémar in Drôme Provençale has retained its medieval aesthetic, from the ramparts of the castle to its old residences. Today, the area offers breathtaking views of the Rhône Valley and the Vivarais Mountains.

Directly above the Church of St Michel, a veritable jewel of Roman art also listed as a Historic Monument, sits the old terraces of the village vegetable gardens. Welcome to the Jardin des Herbes, known as the “Remarkable Garden” for its nearly 200 species of medicinal plants. This natural beauty is also the venue for a chic pop-up bar during a few choice summer evenings.

Just nearby sits another magical place: The Valley of the Nymphs. So-called for its shady but immense holm oaks and cherry trees, this fairytale landscape wouldn’t be complete without a babbling brook of a spring emerging from the rock face. It’s no wonder that people of ancient cultures used to come here to celebrate the cult of fertility and prosperity. Right in the middle of the site, stands the 11th-century Notre-Dame chapel, built completely of white stone.

Following the Footsteps of the Huguenots in Le Poët-Laval

At 24.6 kilometers from the campsite, the fortified village of Poët-Laval, dominated by its imposing medieval keep, is doubly significant. Not only was it built by the Order of Knights of the Hospital of Saint John of Jerusalem, but it also holds the history of the Reform Movement of Dauphinois Protestantism.

A hilltop village founded in the 12th century by the Knights of St John of Jerusalem, and since long abandoned, Poët-Laval was saved from oblivion by a man passionate about art and old stones, Yvon Morin. In the 1950s, he opened the hotel-and-restaurant “Les Hospitaliers,” a venue of high repute. He also built the international center of art and entertainment Raymond Du Puy and rehabilitated the castle, which was the former command center of the Knights of Malta, now open to the public. The history of Poët-Laval, intimately linked to the religious order of the Hospitallers, is also marked by the progression of Protestantism and you can experience this for yourself at the “Musée du Protestantisme Dauphinois.”
Despite its resplendent history, Le Poët – Laval is also the starting point of one of the longest European hiking trails, literally called, “In the Footsteps of the Huguenots.”

This 1,600 kilometer-long international long-distance hiking trail follows the historic route of the exile of the Huguenots Dauphinois on route to Switzerland and Germany, after the revocation of the Edict of Nantes (1685-1690). It takes you from Poët-Laval to Col de Menée, in the Drôme, to reach Germany via Geneva.

Experiencing an Artist’s Legacy in Mirmande

Nestled in the Drôme valley 12.9 kilometers away from our campsite and surrounded by orchards is the village of Mirmande, which offers its visitors plenty of charm and a chance to discover the numerous galleries and craftsmen who today call it home. Mirmande is a little slice of heaven, a true paradise of peace just a stone’s throw from major highways. Find this timeless hamlet, recognized by France 2’s Stéphane Bern as a “Preferred Village of the French” on his show of the same name.

Hidden behind the ramparts sit the houses of Mirmande. Make sure to marvel at the incredible homes that still retain their beautiful stone facades and old doors, and as you roam its labyrinth of alleys. This village, which is already quite southern in its atmosphere and culture, is meant to be discovered slowly and gradually, as you experience its pretty gardens and wafting scents of irises and aromatic plants.

As you’re enjoying this remarkable place, think of the two men who contributed to the village’s resurrection: the Cubist painter André Lhote, who attracted many artists and organized major exhibitions, and the famous vulcanologist Haroun Tazieff, who was its mayor for 10 years.

Nowadays, beautiful art exhibitions take place in the village, or in the church perched at the top of the village. Yes, all accolades must be earned!

A must-see site nearby is the potter’s village of Cliousclat. Rich in fragrant orchards and crops, the history of pottery has always played a significant part in “Cliou”. La Fabrique de Poterie, a traditional pottery factor and studio, still runs today. Visit its boutique and experience the artisans of clay at work firsthand.

Relax in the Warmth of Montbrun-les-Bains

97.4 kilometers away from our campsite, between the ancestral Baronnies and Mont-Ventoux, is where you’ll find the magnificent village of Montbrun-les-Bains, so-called for its springs, fountains, and charming old stone baths.

Built on a rock, the tall houses of Montbrun-les-Bains sport six or seven levels, and, topped with red ocher tiles, they remain unmistakable. But the true icon of the landscape is the ruins of a Renaissance castle, though only the round and crenelated towers remain today. Stroll Montbrun-les-Bain’s sloping streets, which are flanked by refreshing fountains. These small springs remind us that the picturesque village is, above all, an important spa resort, recognized since Roman times for the benefit of its sulfurous waters which relieve rheumatism and treat the respiratory tract.

The spa establishment, a contemporary building that respects the site’s unique history, accommodate spas guests and fitness enthusiasts in a comfortable setting.

The best part? You can enjoy the outdoor spa with an exceptional view of Mont Ventoux!

Discover Crest and its surroundings